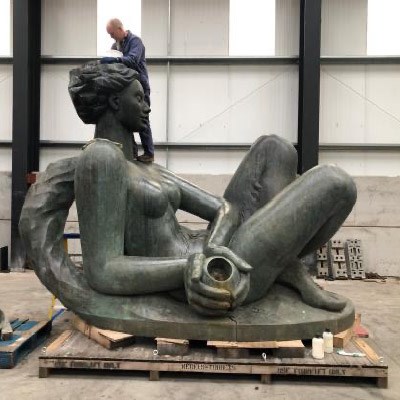 Sat in an upper pool, is a monumental female figure representing the life force and weighs 1.75 tonnes. 'The River' is also a fountain - one of the largest in Europe - with a flow of 3,000 gallons per minute.

At the bottom of the fountain feature are two smaller figures representing youth, also by Mistry.

Working in association with Allelys Group the public artwork was temporarily removed from Birmingham Victoria Square to facilitate significant groundworks and landscaping as an integral element of the wider regeneration of the surrounding area.

The artwork was moved to a secure location where we carried out an extensive conservation cleaning project, maintenance and completed the application of protective wax in readiness for its reinstallation.