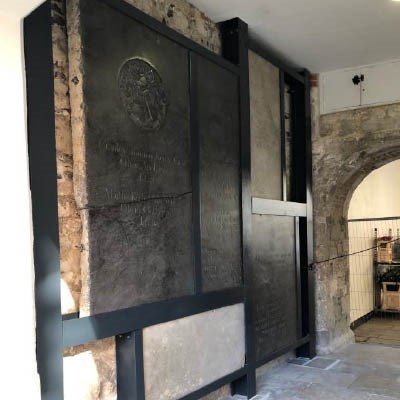 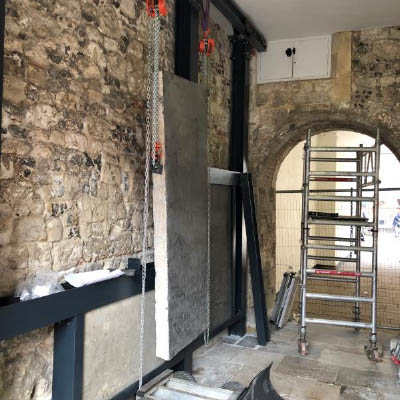 St Maurice’s Covert is the remains of St Maurice’s church which was redesigned by the architect William Gover of Winchester, and opened on 21 July 1842

The body of the church was taken down in the late 1950s.

The covert which includes a 15th-century tower, is built of flint and rubble and incorporates a Norman arch and is Grade II listed. 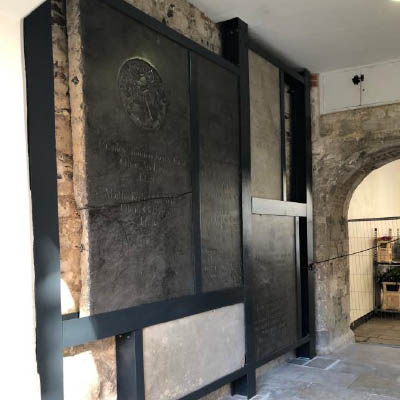 The surrounding area leading from the high street to the cathedral has undergone an extensive revisualisation incorporating new hard landscaping and the installation of contemporary street furniture and urban lighting.

For many years a number of the original surviving ledger stones from St Maurice’s Church had been set into the pedestrian area adjacent to the covert and these had become a well-known cultural heritage landmark.

As part of the hard landscaping project the ledger stones were removed and placed into safe storage.

An important and integral element of the urban upgrade was to re-display the ledger stones and present them within a new interpretive setting.

Ian Clark Restoration was engaged to work with the project architects Scott Whitby Studio to provide a one-stop commission to supply 3 work packages to include architectural conservation, interpretation and structural steelwork and ledger stone installation.